Italian numbers
How to count from zero to one billion in Italian
Days of the week
How to say the days of the week in Italian
Months of the year
How to say the months of the year in Italian
How to say "The"
Meet the definite article — the many little words for "the" in Italian
Question words
Who? What? When? Where? Why? How? How much? How many? How to ask questions in Italian
Talking about the family
Useful vocabulary for talking about your nearest and dearest
Asking directions
How to ask where something is, and words you might hear in response
To be (in love)
Learn how to use the extremely important verb: essere (to be)
To have (hunger)
How to use the verb "avere"(to have)
Going shopping (-are verbs)
We'll go shopping and explore how to use verbs that end in -are
Taking everything (-ere verbs)
Discover why the verb prendere is like George Clooney, and learn how to use verbs ending in -ere
Time concepts
How to say early, late, sometimes, never and other time concepts in Italian.
Possessive adjectives
How to use all those little words that say whether it's his cookie, her cookie, their cookie, or your cookie. 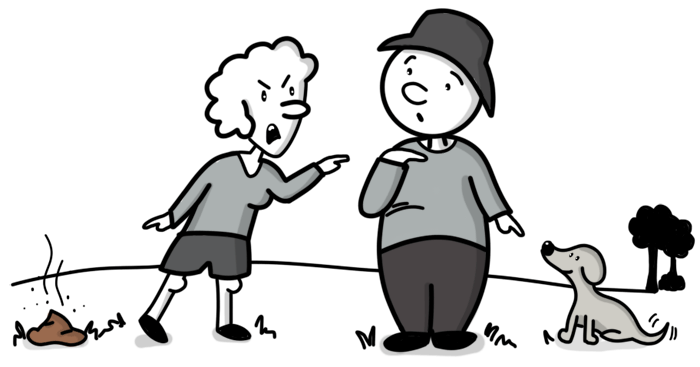 You can't disown that pile of poop in the park unless you know how to say "that's not my poop!". So let's look at Italian possessive adjectives, which will let you say if it's her poop, your poop, or their poop.

(Fair warning: Before you dive into this lesson, I recommend you take a look at my lesson on the definite article, a.k.a How to say "the", because this lesson needs a few "the" words as well.)

In Italian, the possessive adjective you changes according to two things:

Here are all your options:

As you can see from the above Mildly Intimidating Table™, there are quite a few more possessive adjectives to master than the paltry eight we have in English.

Italian possessive adjectives agree in gender (masculine/feminine) and in number (singular/plural) with the noun they refer to.

For instance, "horse" is a masculine noun, (regardless of the gender of the actual horse in question) so it uses the masculine mio and miei.

Cars, however, are always feminine. So when you're talking about your car or cars, you use the feminine versions, mia and mie.

Did you notice those definite articles (words for "the) changing too? (il/i and la/le)

A possessive adjective (my, your, their) will usually come after the definite article (the). This is why I recommend you master the lesson on words for "the" first!

In Italian there is no such distinction. Instead of "his house" or "her house" it's just "la sua casa" — regardless of whether the owner is a guy or a gal.

But it does change for the quantity.

Let's see it in action for your. I'll show you for both a masculine noun (table — tavolo) and a feminine noun (chair — sedia).

Our is also straightforward. I'll show you for both a masculine noun (bathroom — bagno) and a feminine noun (kitchen — cucina).

Your (more than one person)

And your (i.e., more than one person) is also pretty easy. I'll show you for both a masculine noun (glass — bicchiere) and a feminine noun (bottle — bottiglia).

Most of these have been straightforward, but here comes the curve ball! The Italian word for "their" — "loro" doesn't change according to gender or quantity like all the others do. Check this out:

So how do you know if you're talking about a masculine/feminine/singular/plural thing? Just pay attention to the article in front of it ("il", "i", "la", "le").

There's a lot to memorize in this lesson. Here are a few useful phrases to help cement your knowledge.